The latest report from comScore reveals the most recent smartphone market share statistics, and it seems not much has changed since their October report. Apple still dominates the smartphone OEMs by a landslide, and Android still ranks as the top smartphone platform with a whopping 51.7% lead. To see the full list of January’s percentages slotted against the October statistics, see the chart below. 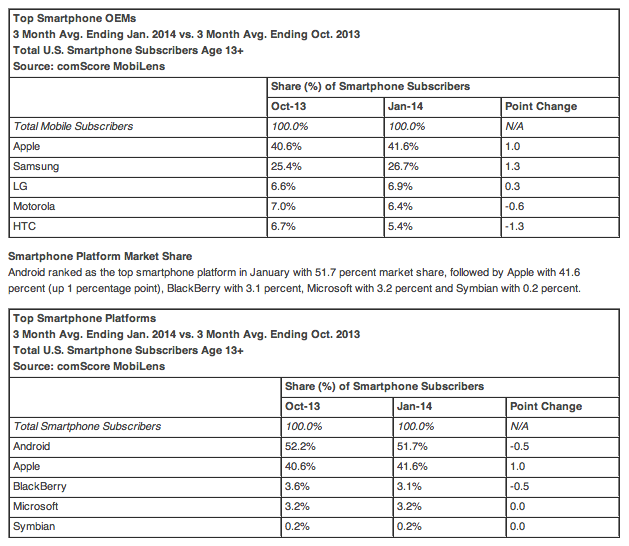 2013 as a whole only saw slight fluctuations in overall market share statistics, with the exception of a few key changes. Blackberry’s command over the smartphone market has been in a steady decline since January of last year, dropping from 5.9% in January 2013 to only 3.1% and effectively falling behind Microsoft’s platform. The company switched its focus last year with its decision to replace CEO Thorsten Heins with a man who has a reputation as a ‘fixer’ of companies, John Chen. Chen’s betting that Blackberry’s future is in its past, and has alluded to a greater emphasis in the features the originally made Blackberry great (namely its physical QWERTY keyboard, which isn’t a feature present in their newer Z series devices).

But with the impending smartphone 2014 releases from the market’s top competitors, can Blackberry keep up, or will it fall off into oblivion? If previous years are any indication, Apple is slated to introduce their iPhone 6 this fall (but again, if previous years are any indication, we won’t hear any info leaks until WWDC in June). Samsung’s Galaxy S5 has already garnered its fair share of attention – whispers of a 64-bit Exynos processor and 5.25-inch QHD Screen are amongst the rumors of Samsung’s new device, which has yet to nail down its release date. LG’s also hopped on the big QHD train, presumably with their G3 device, which likely won’t debut until the second half of this year.

Regardless of whether the 2014 OEM releases will shake the numbers up, there is one figure that has been climbing higher with every new comScore smartphone market share report. Smartphone owners have reached 66.8% mobile market penetration out of a total 159.8 million people in the U.S., up 7% in just three months. With more users hopping on the smartphone bandwagon (and former Blackberry aficionados switching over to iOS and Android), the demand for innovative, groundbreaking apps grows ever higher.