Once upon a time, Blackberry’s operating system boasted a ~50% market share of all smartphones in the United States. But much has changed since 2009. In 2010, Android claimed the majority of mobile OS platforms, with Apple creeping close behind, and eventually Blackberry was left in the dust.

Market share statistics tell a story of the potential reach of a new mobile app, but they do not tell the whole story. comScore recently shared various demographic statistics as it pertains to iOS and Android users; every developer should be equipped with the data illustrated by this infographic when they are forced to choose between platforms. Click the image to the left for a larger view. 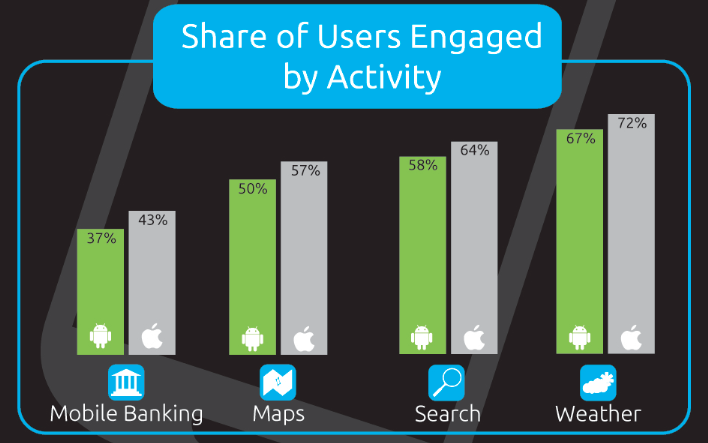 iPhone users engage more; Android users encompass a bigger audience.
An app released to Google Play might be picked up by a wider audience, but it will likely be used more by those who have purchased it from the Apple store. Not depicted by the infographic, comScore reports that iPhone users are:

Whether it is more beneficial to have a wider reach or better to have more active users will depend largely on where your app’s revenues come from.

iPhone users spend more.
iPhone users are 6% more likely to engage in mobile commerce than Android users. This means paid apps, in-app purchases and retail purchases in general – and is an important consideration for developers who intend to reap their income in this way.
source: comScore.com