Google has released their free, open-source IDE, Android Studio – the result of collaboration with the developer of well-known Java IDE, IntelliJ IDEA. The premise isn’t entirely new for developers who have previously shelled out the $700 cost for IDEA, but it is an exciting alternative to the other free, open-source IDE available to Android programmers, Eclipse.

Studio leaves a good first impression. Google offers a simple download and installation, and then delivers with a clean display, a smooth editor and a few brand new features that didn’t previously exist in IntelliJ’s software. Our biggest gripe would be the issue of a heavy, sluggish simulator – you might want to run Android inside VMWare Player while running adb for testing, instead. 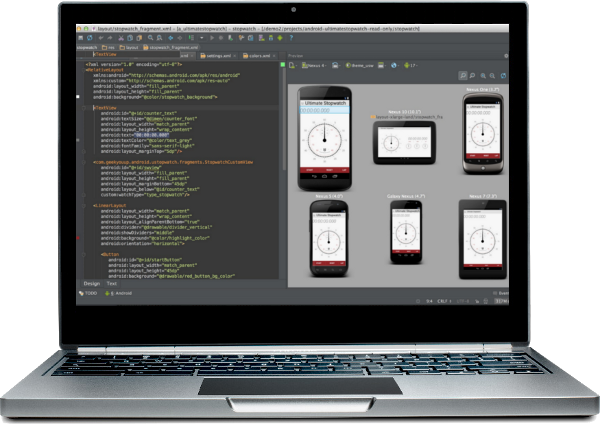 The improvements that Google has implemented on top of IntelliJ’s IDEA are thoughtful and thorough – a mixture of design elements and analytical tools that serve to enhance the overall interface from its original counterpart. For instance, the Android API added a static code analysis that highlights potential bugs by pointing out which routines could send back a null pointer. The result is essentially a program that analyzes your code and allows you to refactor it with a cleaner, quicker outcome.

The new drag-and-drop feature in the GUI is a timesaving design tool – just shuffle your widgets around, and Studio gives you an XML output in the frame below. When the layout is complete, Studio lets you view the design in various device dimensions, so a cosmetic issue exclusive to Nexus tablet’s layout won’t go unnoticed in lieu of code that’s only been tested on a smaller screen.

Android Studio’s build tool of choice is Gradle, which ought to make it easier to create multi-project builds (though it can initially be a bit unnerving coming up from Ant or Maven). Google has discussed a future that involves integrating Gradle more with the cloud, which is a nice prospect for proponents of a cloud-based development environment. Although they’ve already developed a plugin called ADT Translation Manager, which allows you to easily translate exported strings via the Developer Console, the idea of a fully integrated cloud is still in its infancy. As adaptable as they’ve made Android Studio, it still functions as a traditional (albeit, advanced and refined) desktop IDE.