The Scoop on Android L: What Android Developers Should Know

Android 5.0 has given Android developers a lot to look forward to.

Google I/O gave us a lot to process – and while the Google’s chief of Android development, Sundar Pichai, may not have revealed the new dessert name for Android 5.0 (codenamed Android L), Pichai did reveal a bunch of its tasty new features.

Android L is huge – its magnitude is comparable to the shift from iOS 6 to iOS 7, and Android developers with an app in the Google Play Store will want to pay heed to the changes. There is a ton of potential packed into the new design language, and a refined interpolation between devices that should have developers contemplating how they will extend the reach of their existing software. 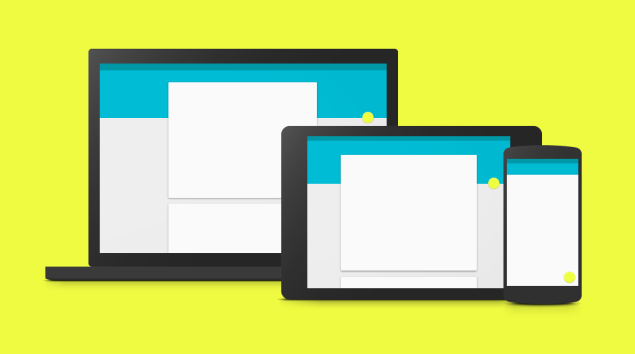 Android’s new ‘visual language’ ranks number one in the list of Android improvements – because really, it’s more than just an improvement. It’s an entire reimagining of Google’s UI, and it syncs across all smartphone, tablet and desktop platforms – with the goal of integrating into all of Google’s services, including recently announced Android Wear, Android Auto, and Android TV.

The beauty of material design is in its optic tactility… Google describes it best in their introductory spec when they describe the core of “material” as a “metaphor.”

“Surfaces and edges of the material provide visual cues that are grounded in reality. The use of familiar tactile attributes helps users quickly understand affordances. Yet the flexibility of the material creates new affordances that supersede those in the physical world, without breaking the rules of physics.”

It’s interesting to note that both Android L and the earlier design upheaval that came along with Apple’s iOS 7 UI trend towards minimalist, but while Apple went “flat,” Google decided to ramp up the motion and dimension of the display. Material Design is characterized by a 3-dimensional property in the form of shadows and real-time responsiveness that, judging by their Android developer’s preview, really lends a magical quality to touchscreen interactions. Those of you with planned or existing Android apps really ought to be thinking about how Material Design can enliven the entire user experience.

ART was introduced as an option with Android 4.4, and with 5.0 will replace Dalvik entirely and become the default. This was probably anticipated, but now the time has come to adjust compatibility accordingly – and reap the benefits of improved battery life & memory efficiency, a 2x performance increase and the truly cross-platform support for ARM, x86 and MIPS.

Android devices have a new function called Bluetooth Low Energy (BLE) peripheral mode. Essentially, your app can use this capability to broadcast the presence of your device to other nearby devices. The implications will undoubtedly make an impact for health tracking and fitness apps… for example, an app that function as a pedometer or health monitor and then transmits the data accrued to a nearby, Bluetooth enabled device.

Now Android offers heads-up notifications that pop up over whatever you are doing when your device is active – no more dragging down the notifications bar with heads-up enabled (assuming it is optional and customizable rather than mandatory, which we think it is). The new lock screen notifications are a prime example of the hierarchal, scientifically fueled structure of material design – they are stacked with purpose and easy to navigate. How will your app handle pushes with Android L?

Change is exciting, but the grim reality of the constantly changing landscape of mobile OSes is that they often leave a graveyard of failed apps in their wake. The ones that succeed are the ones that maintain relevancy, and it’s only possible by leveraging the new features that provide an optimal user experience. Android L is full of them.

To learn how HarborDev’s Android developers can help your application leverage the beautiful interface, maximize efficiency and even achieve device interpolation with other Android-powered devices, visit our native app development services page, or contact us to consult about your mobile application today.