The Internet of Things is Changing the World, and Here’s How.

Could the Internet of Things (IoT) bring about the world’s next Industrial Revolution? Billions of dollars are being spent worldwide by government agencies, corporate stakeholders and forerunning technology vendors who are all banking on the notion that it will.

The “Internet of Things” is the term that has been appointed to describe the predicted apotheosis of the last several decades of Internet technology’s evolution. A 2013 report from The Economist, sponsored by ARM Technologies, referred to the steady emergence of the Internet of Things as a “quiet revolution.” And it was fairly quiet – until recently. The graph below of Google’s search activity is a reliable determinant of how much the concept has shot up in relevance over recent years. 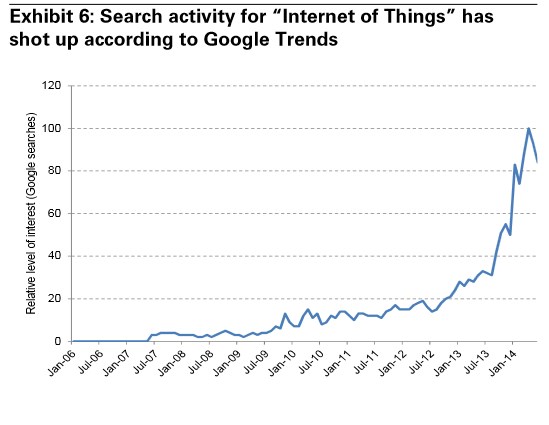 Google trends in search activity for “Internet of Things” over the last eight years. Source: Goldman-Sachs.

The term is making its way into our vernacular, but the hype surrounding very niche products like Google Glass and other upcoming wearable technology has turned “IoT” into a clunky buzzword that has been overused to the point of sounding trite. IoT is more than just wearables and cars that drive themselves. To understand what our future will look like, understanding the Internet of Things is critical.

So what is IoT?

In its simplest terms, the Internet of Things is a network of physical objects that have been embedded with technologies that allow for Internet connectivity, the ability to sense environmental conditions, and an automated inclination to communicate with each other. Cisco’s website states the impact of this best:

“When objects can sense and communicate, it changes how and where decisions are made, and who makes them.”

The ultimate result of widespread adoption of IoT technologies would bring increased efficiency, safety and security to an array of industries: Manufacturing, transportation, healthcare, farming and energy, to name only a few. Sensors will exist that alert technicians to faulty equipment in an effort to prevent accidents and impediments to production before they occur. Anything that requires an input of power to operate will be able to track and automate its own energy consumption and cut any costs that are incurred from excess use. Office items will sense when their supplies need to be replenished, and place an order for delivery. Your coffee pot will “hear” your morning alarm clock and start brewing before your feet hit the floor.

In fact, most of these technologies already exist. Cloud and “Fog” computing provide a network through which they can operate and interact. But the barrier to prolific adoption has been a tough one to cross. As it currently stands, we’re still on the cusp of the great impact that IoT could have on our world, merely dipping a toe into the pool of possibilities.

The IoT hurdles include concerns of privacy and security that likely resonate with anyone who has ever given IoT any consideration. When your smart refrigerator can scan barcodes and monitor the items behind its doors, does that mean it is acceptable to be bombarded by food advertisements every time you walk into your kitchen? When your health records and payment information are stored within a network of your own personal connected devices, does that mean someone could hack your running shoes and gain access to your social security and credit card numbers?

Another great barrier to entry has merely been the complexity of assimilation. Each vertical market has its own set of use cases and requirements that make a “one-size-fits-all” approach to integration impractical. The technology exists, but the litigation, the standards and the know-how are still in the process of being actualized. 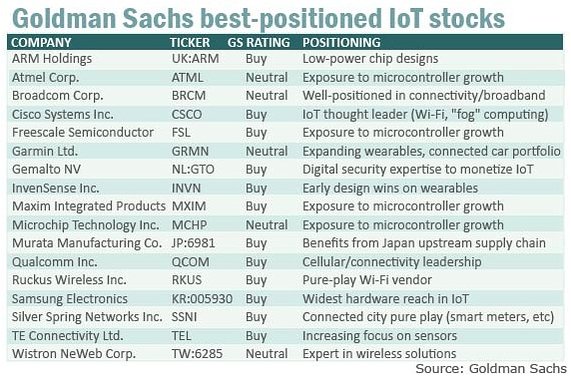 The best-positioned Internet of Things stocks, as forecasted by Goldman-Sachs.

Still, the investment that’s already been made into IoT proves that the technology is impending. Goldman-Sachs recently released a note anticipating which companies might be poised as trailblazers (Interestingly, neither Apple nor Google made the list). In April of this year, the UK increased their allotted spending to IoT technologies from $45 million to $73 million (Bird&Bird). China plans to funnel out $600 billion by the end of 2020 (Engadget). City24/7 has solicited the help of Cisco and the City of New York to place Smart Screens all over NYC.

So if you think the Internet of Things is a tough pill to swallow, then brace yourself. As we see the IoT evolve, we’ll even begin to see a congruous transcendence into the “Internet of Everything:” a concept favored by inventor and author Ray Kurzweil, who expects to see people doing more than interacting with connected devices, but rather acting as connected entities themselves. An example might be a “pill” empowered by nanotechnology that can monitor the health of a person’s digestive tract. And in a sense, aren’t many fitness-tracking technologies that sync health data with programs like iOS 8’s HealthKit or GoogleFit already enabling this idea?

The Internet of Everything will connect people, data and machines in a way that enables a fluid exchange of processes and information.

Whether you fear for the dawn of real-life Skynet or can hardly wait for your Jetsons-style Smart Home, the Internet of Things is going to make an impact on the world we live in. And with a thoughtful implementation of ethical policies and a steadfast cooperation between corporations, governing bodies and individuals, the Internet of Things can really make an impact for the better.