Apple blew us away with the recent WWDC keynote announcing all of the new features they’ve incorporated into the upcoming iOS 8 release. A feature called ‘Extensions,’ which allows apps to extend functionality to other apps, will be a game changer for developers. ‘Continuity’ empowers awareness between two Apple devices, so that users can start a task on one device and finish on another. But given our own foray into mHealth, we’re most interested in the cornerstone the company has laid in the health & fitness tracking space: HealthKit. 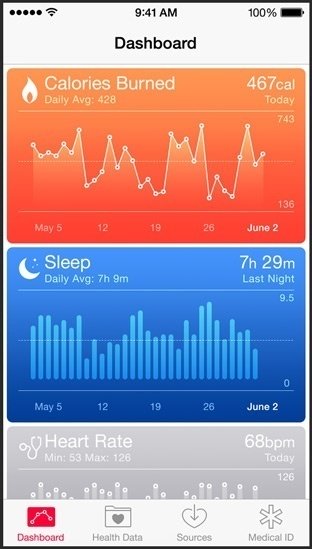 The concept fueling the new SDK is comparable to Passbook of iOS 6, in the sense that the primary function of the user-facing app, Health, is to consolidate information from various outside resources – information that, according to senior VP Craig Federighi, currently “lives in silos” due to how inaccessible it is for users. Apps for smartphones and wearables can achieve “everything from monitoring your activity level, to your weight, to chronic medical conditions like blood pressure and diabetes,” but the biggest challenge currently facing mobile’s integration into healthcare is how to composite that information and then translate it into solutions for patients and providers.

Apple hopes to offer an answer to this, and has lent themselves credibility by partnering with the Mayo Clinic. They’ve integrated a Mayo Clinic app with HealthKit to enable transmission of data between doctors and patients which, thus far, is focused entirely on dealing with the information made available by third party apps and hardware. Nike fills a feature role as one such third party application, but we’re eager to see Apple emerge with wearables of their own (iWatch anyone?).

We love to see the mobile health market excel. The prospect of Health becoming mainstream would allow patients and doctors to interact in real time, remotely, saving doctors time and improving the quality of patient care. The success of wearables like the Nike+ FuelBand and fitness centers like OrangeTheory (where members wear heart monitors to assist in achieving optimal zones of cardiovascular exercise) show that there is a market for users that want immediate access to this type of data. But mHealth has a much farther reaching potential than personal fitness. Mobile technology is positioned to embed itself into the very bones of healthcare’s infrastructure – to entirely revolutionize the way it is delivered – and Apple was smart not to write it off as a passing fad.