7 Corporations That Have Begun Using iBeacons

You’ve probably seen iBeacons before – even if you did not know it. They’re one of Apple’s latest implements, and they’re probably coming to a store near you: not for purchase, but rather to help you make purchases. An iBeacon is a Bluetooth low energy (BLE) wireless location system that can transmit signals to your mobile device when you bring it within range. The benefits are heralded when apps receive this signal and respond with a trigger, and a few tech-happy retailers and service providers are hoping to use iBeacons to offer better customer experiences.

For now, iBeacons are still in the trial phase – but here are several big companies testing out Apple’s new technology as a powerful marketing and commerce tool. 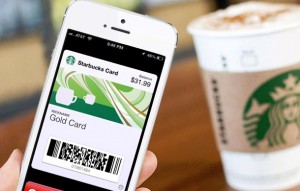 True to its history as a ready advocate for new technologies, Starbucks was one of the first companies to test iBeacon. Users who have the Starbucks app installed and Bluetooth enabled on their phone will receive push notifications upon arrival to participating locations, perhaps reminding them about rewards points they have accumulated, or transmitting special promotions. These little beacons can also accept payments – so anyone with a mobile wallet can pay for their coffee wirelessly from their device. 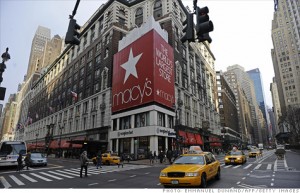 Macy’s started their trial around the end of 2013, using Shopkick’s mobile loyalty app as their platform of choice.

The app works by offering rewards to proximal shoppers, and lets participating users link credit cards to earn loyalty points. It functions like a mailer by alerting shoppers to deals and sales – but it’s paperless, wireless, and instantaneous. 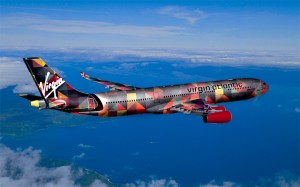 Virgin Atlantic began their iBeacons trial back in January at Heathrow. International travelers were notified of commission-free currency exchange offers, and departing passengers who had their boarding pass loaded in Passbook did not have to prompt their phone to retrieve it – the boarding pass loaded automatically as they approached the security gate. 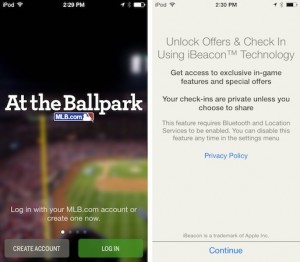 MLB’s At The Ballpark app has been improved with iBeacon technology for the start of the season. Fans using the iBeacon app were able to “check in” to the ballpark and receive special offers on food and merchandise.

Tesco opted to steer clear of marketing prompts in their early 2014 trial. Instead, they used the technology at the Chelmsford store to notify shoppers when their pre-ordered goods were waiting for them.

American Airlines only recently joined the iBeacons game in June, but their trial is proving to be rigorous and well thought. For six months, participating users of the AA app will be notified with guiding messages on their mobile devices – for instance, notifications informing them where their departure gate is, or at which carousel number they can claim their baggage. The notifications even include an estimated walk time, so passengers can gauge whether they have time to step into the newsstand before they board. 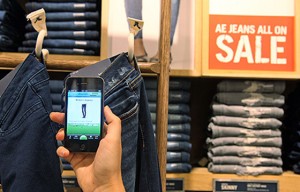 American Eagle’s trial is quit similar to Macy’s – both are using the Shopkick app, and neither have seen huge-scale deployment. The convenience with participating retailers seems to be in remembering; thanks to iBeacon alerts, deals and offers will find their way to you whether you seek them out or not.