Twitter today announced Music on Vine for iOS and Android to help users discover and create music on the short-form video sharing service.

This article is curtesy of VentureBeat and their dedicated team of Bloggers. Find the full article here.
“Music has been part of Vine’s culture since the beginning,” the company says on its new website. “Now, we’re connecting you to the music you love, starting with new ways to discover and create with music on Vine.” 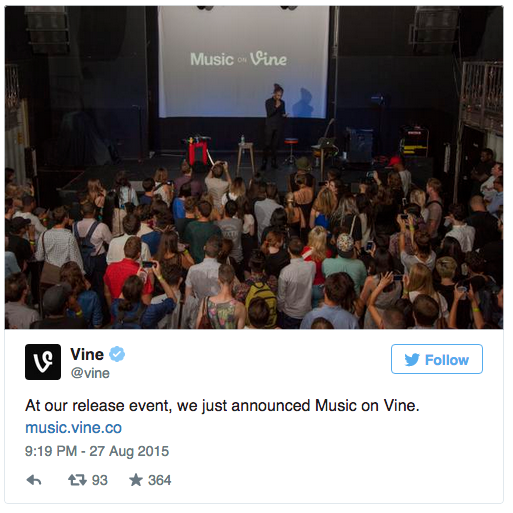 Vine was acquired by Twitter back in 2012 for a reported $30 million, and the service has now grown to a 200 million active monthly user base (“who watch Vines every month”), according to the company’s blog posting. The app allows users to share six second-long looping video clips.

VB just released Mobile User Acquisition: How top publishers get the best users for less money. $499 on VB Insight, or free with your martech subscription.

Users will be able to explore a new Featured Tracks section, from where they can add songs to their own feeds. A music note icon will also be displayed next to Vines allowing users to tap on it and see track info. (We’ve reached out to Twitter to ask if this hints at a new licensing deal with music publishers).

In terms of licensing deals: That applies to Featured Tracks. Now that people have the ability to add music to their Vines, we want to make sure they have access to music they can use. Our editorial team selects songs they think our community will enjoy, and then we work with labels, publishers and artist management to license songs and bring them to Vine as Featured Tracks.
A new Snap to Beat feature makes for easy creation of music loops. Alternatively, “Turning off Snap to Beat lets you add a song or sound to any part of your Vine,” the company says.

The goal is clear here. Twitter wants more artists to use Vine to share their creative work:

As artists turn Vine into their stage —from rising musicians who entertain us to creators who remix and hypnotize us through collaborations — their talent reaches far beyond the app… Artists use Vine to make music together, and they extend their collaborations beyond Vine, forming bands, releasing remixes and playing together in person.
New music discovery features will be available from Friday, but the creation tools appear to be only available on iOS for now.

It’s worth noting that this isn’t the first time Twitter has tried to enter the music space. In April 2013, it launched Twitter Music, a service that was also dedicated to music discovery and helping users find out what was trending. But the app ultimately flopped and was shut down after just 12 months.

Laura is HarborDev's Creative Director, which means she is in charge of everything that is design. "Technology excites me, it's always ploughing forwards. I stay focused on the horizon, in anticipation of what's coming up next."We couldn't have said it better.