Apple’s release of iOS 5 is finally upon us, and with it comes over 200 new features that arguably make the software one of Apple’s greatest operating system improvements to date. Last year, the iPhone 4 arrived with the promise: “the future is in the details.” Apple certainly still adheres to that standard – something as simple as the volume + button now acting as the Camera’s shutter, for instance, makes a world of difference for the app’s usability – but iOS 5 delivers on more than just the small details. Here are five big changes that users can expect after updating their devices. 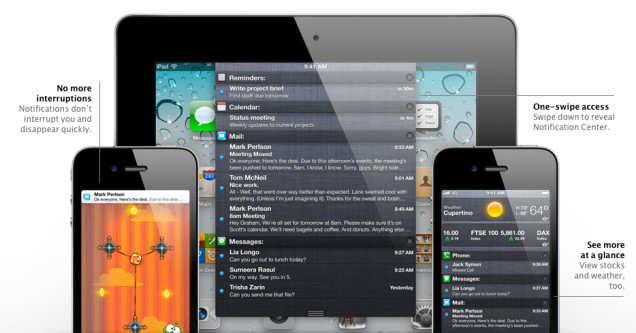 1. Notifications
Apple has finally done away with the obnoxious, task-interrupting pop-up notifications and replaced them with an all-inclusive ‘Notification Center.’ It’s similar to a feature that has previously been available on Android devices, and executed with all the elegance you would expect from Apple developers. Notifications will no longer run interference when you’re trying to take a quick photo, for instance, but instead will drop down subtly from a notification bar at the top of the screen. Swipe the notification bar down to reveal notifications from Calendar, Messages, Phone and Mail, as well as mini-widgets for Weather and other user-selected apps. 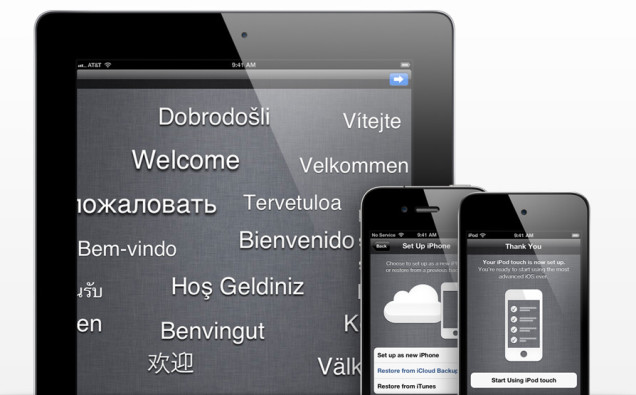 2. Wireless Activation and Wireless Syncing
Congratulations, your iDevices are now completely autonomous. New iOS devices (like the upcoming iPhone 4S) will work right out of the box with iOS 5’s wireless activation, so those users who don’t own a PC can now reap all the benefits of Apple’s mobile devices. On the same note, you no longer need a USB to sync iTunes – just login to WiFi to sync iTunes, backup iCloud, and update your software over the air. 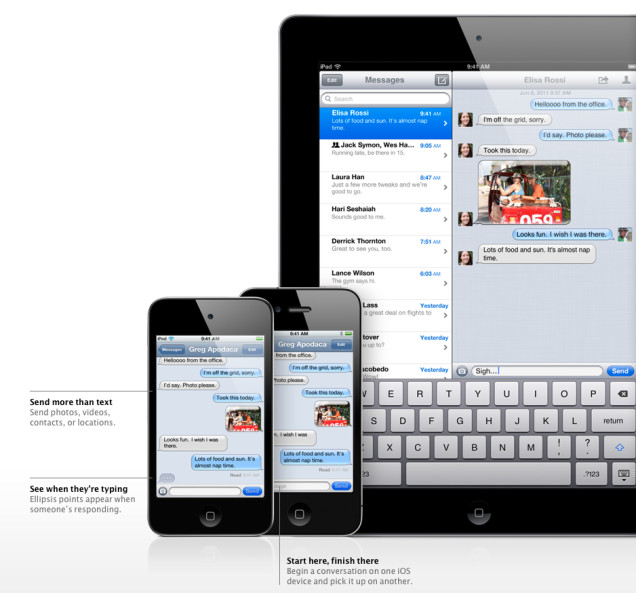 3. iMessage
If you’ve used third-party apps like WhatsApp, then the features of iMessage should be straightforward. iMessage enables users to send messages to other iOS users for free, between all devices – which means not only will hefty SMS and MMS packages touted by carriers feel the burn, but also that conversations will sync seamlessly between your iPhone and iPad. The service is available via both 3G and WiFi, but unlike WhatsApp, iMessage won’t work with other non-iOS devices.

4. Better Accessibility
Apple has prioritized accessibility from the company’s inception, and their improved features truly do make the world of smartphones more accessible to the hearing- and vision-impaired. The details of their improved accessibility features include custom vibration patterns & an LED flash option for incoming calls and alerts, better voiceover support, a hearing aid mode, a new interface for pairing iOS with external mobility-impairment input devices, and text enlargement settings. 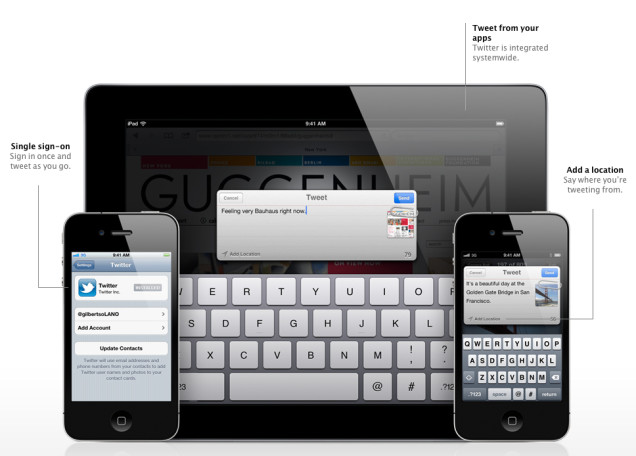 5. Twitter Integration
Twitter is now built-in to iOS 5. With one install from your device settings, you can Tweet from Safari, Camera, Maps, Photos and YouTube. In addition, location services are enabled, so you can add your location to any tweet. There is also an option to sync Twitter profile pictures and usernames with your Contacts.

The release is compatible for immediate download onto iPad 2, original iPad, iPhone 4 & 3GS, and third- and fourth-generation iPod touch.